Some detailed examples of public-private partnerships of the last period to get inspired by.

“Arterial stiffness is a major risk factor for morbidity and mortality. Although stiffening of the vasculature is a physiological process which occurs during aging, there are many factors resulting in accelerated stiffening. Some conditions, such as aging, cannot be helped; others, however, can be influenced by lifestyle or diet. With the help of new technology and applied scientific research many patients can be monitored and treated after a diagnosed cardiovascular problem”, says drs. Mehrdad Omidvar, CEO of VitaK Innovation in Life Science.

Until now, vascular elasticity could only be measured with large, expensive equipment in hospitals. To bring the technique closer to the patient, VitaK, a spin-off from Maastricht University, has developed under supervision of Associate Professor dr. Cees Vermeer the “Stiffnograph”, a new, portable medical device. With the help of the StiffnoGraph, care providers are able to monitor non-invasively the stiffness of the large arteries within 2 minutes.

On the basis of the obtained results and the medical dossier of the patient/client, the care provider is able to take necessary medical steps and to provide substantiated nutrition advice using the “Vermeer Index”.

“Vascular stiffening is the result of calcification, elastin degradation and changes in the smooth muscle cells in the arteries. There are many factors influencing these processes. In the past decades, VitaK has extensively studied which conditions contribute to vascular stiffening and how improved nutrition may help keeping the vessel wall elastic. Besides investigations in our own laboratories, tens of thousands of subjects were screened in collaboration with leading research centres in universities and hospitals all over Europe, and hitherto unknown associations between nutrition and cardiovascular disease were discovered. From these studies it appeared that the three major risk factors for loss of vascular elasticity and related cardiovascular mortality are: age, tobacco smoking and subclinical vitamin K deficiency”, says dr. Cees Vermeer, CSO of VitaK.

Target groups: The StiffnoGraph is especially developed for measurements in patients or clients with prevalent cardiovascular disease, but also in high risk groups including elderly people, diabetics and patients with chronic kidney disease. The device is meant to be used by health care professionals such as general practitioners, orthomolecular physicians, sports physicians, alternative medical practitioners, physiotherapists, dieticians, etc.

StiffnoGraph: This is a Point-Of-Care (POC) system / in vitro diagnostic device which is easy to operate. Besides the Arterial Stiffness score (from 1 to 6) also the oxygen saturation (SpO2) and heart beat are accurately shown. The device comes with a handbook written by dr. Vermeer which not only contains a manual but also an overview of 21 factors contributing to vascular stiffening. Moreover, the handbook contains a table elaborating the Vermeer Index, which may form the basis for dietary recommendations.

VitaK: VitaK Innovation in Life Science is a spin-off from Maastricht University and has many years of experience in clinical scientific research and the development of new diagnostic test systems. The application thereof in our Care line takes place on the basis of patented concepts. Presently, VitaK’s scientists are developing the “CardioCare” and the “NephroCare”, two POC systems which are specifically targeted for use in cardiovascular patients and kidney patients, respectively.

Potent and safe T-cell receptors (TCRs) specific for cancer antigens and useful for T-cell-receptor gene therapy of cancer patients will be identified by the LUMC in this project. The industrial partner Bellicum Pharmaceuticals will initiate clinical studies in which cancer patients will be treated with these tumour-specific TCRs in combination with their recently developed inducible suicide switch (link).

Gene therapy makes it possible to engineer tumour-specific T-cells by chimeric antigen receptors (CARs) or TCRs, and those engineered T-cells have demonstrated powerful anti-tumour reactivity in cancer therapy. TCRs have the conceptual advantage that both antigens derived from extracellular and intracellular proteins can be recognised in the context of human leukocyte antigen (HLA) molecules at the cell surface of target cells.

Recently, we have developed a high-throughput strategy to identify high-affinity, tumour-specific TCRs. With this strategy we identified such TCRs:  1) TCRs specific for PRAME, recognising a high variety of cancers, and 2) TCRs specific for the B-cell transcription factor BOB1, which exert highly potent reactivity against different B-cell malignancies, including multiple myeloma. Bellicum Pharmaceuticals will now initiate clinical studies with these different tumour-specific TCRs.

In this project, we will explore whether more high-affinity TCRs directed against other tumour-associated antigens can be identified so as to increase the number of cancer patients who can be treated with TCR gene therapy. With the TCR gene therapy studies we hope to develop effective medicines for cancer patients that will either lead to a cure or prevent cancer progression and therefore improve these patients' quality of life.

See the Health~Holland project page for an overview of funded projects.

Sigmascreening, a Dutch MedTech developer and world leader in the field of pressure based digital mammography and breast cancer screening, announces that a large independent Norwegian study further confirms Sigma’s hypothesis that pressure has a clear relation with the most optimal results in mammography. The study confirms the importance of pressure in accordance with Sigmascreening’s concept of the Sensitive Sigma Paddle, which applies pressure guidance during mammography. The combination of results of an earlier Dutch and this new Norwegian study shows an optimal pressure in the range of 10 kPa. This pressure clearly correlates very well with the proposed pressure by Sigmascreening.

The data show that high breast volume and low compression pressure are associated with positive performance measures such as lower recall rate and higher specificity (true positive) of tumor detection. Procedures with too low pressures result in unnecessary recalls due to false positives. Flattening of the breast on the basis of pressure, also prevents unnecessary discomfort and pain, which may contribute to a higher breast cancer screening compliance of women. The Sigma pressure technology aims to optimize these three elements.

Sigmascreening’s Sensitive Sigma Paddle is the first pressure based compression paddle providing real-time and reproducible information on mammographic pressure, which can considerably reduce frequently experienced pain for women during screening. It optimizes compression for every individual breast, taking into account breast size and tissue stiffness, which leads to an optimal mean contact pressure per woman thereby optimizing both specificity (true negative) and sensitivity (true positive) for the most optimal screening result.

Ivo Aarninkhof, Sigmascreening’s CEO, says: “We strongly believe that our less painful solution will increase the compliance of breast cancer screening programs, while at the same time significantly improves the diagnostic performance.”

Sigmascreening’s pressure-standardized breast compression is expanding rapidly in screening centers and hospitals throughout Europe. In Europe, over 10,000 patients already experienced the more  woman-friendly way of making mammograms while clinicians are starting to recognize the improved sensitivity and specificity of our technology. The Sensitive Sigma Paddle with CE marking is already being used in the United Kingdom, Norway, France, Germany, Sweden, The Netherlands, Belgium and Switzerland.

The University Medical Center (UMCG) is part of the group of the largest hospitals in the Netherlands. Together with the University of Groningen it forms the leading knowledge hub of the Northern Netherlands.

With a multidisciplinary research theme ‘Healthy Ageing’, the UMCG has increasingly geared its activities towards the valorisation of knowledge and expertise. This has resulted in a substantial increase in activities fostering technology transfer, the initiation of field labs, and the development of public-private partnerships (PPP) between the UMCG and companies on a global scale.

The UMCG has been involved with the PPP programme of the Top Sector LSH since shortly after its launch in 2012. Each year, the UMCG receives a set amount of PPP Allowance to generate new public-private partnerships. With intensive support from Health~Holland, the UMCG managed to overcome challenges in carrying out the PPP programme so that it can make full use of the regulation and PPP Allowance at hand.

As a result, since 2014, more than 20 projects have been supported by the PPP Allowance. These projects range from biomarker validation to drug development, imaging solutions and medical technology. The UMCG is pleased to note that the Top Sector approach has led to an increase in opportunities to excel in innovation, strengthening of existing relationships with industrial partners and SMEs (see UMCG annual report 2016). The intensive collaboration between Health~Holland and the UMCG in the execution of the top sector approach therefore contributes to substantial growth of private funding of crucial healthcare research.

Interested in some projects that are a result of the PPP Allowance of the UMCG? Read two examples on the Health~Holland project page:

Prof. Andrew Webb, Professor of MRI Physics at the Leiden University Medical Center (LUMC) has been awarded the 2017 NWO Simon Stevin Master Prize. The prize includes a cash award of 500,000 euros. Prof. Webb is planning to use the cash to develop new MRI techniques that allow diseases to be detected in much earlier stages. He is also developing mobile MRI scanners that can be used in developing countries.

Magnetic resonance imaging or MRI is a technique that makes detailed images of the body using powerful magnetic fields. MRI scans generate clear images of even the most minor abnormalities. Prof. Andrew Webb of the LUMC nevertheless feels there is room for improvement.

‘Our most important goal is to develop new MRI techniques that allow better medical diagnoses to be made and therefore diseases to be detected earlier,’ says Prof. Webb.

Early diagnosis is of essential importance in diseases that can still be treated readily in the earlier stages. Healthy people with a family history of hereditary diseases such as Huntington’s disease, could benefit greatly from improved MRI scanners. Eye tumours and the first symptoms of Alzheimer’s are other examples of diseases that would benefit from detection in the earlier stages.

To realise the new MRI techniques, Prof. Webb’s team uses a very powerful magnet of which there are only about 60 available around the world. They are designing and building the scanning equipment required themselves. As soon as the technology is mature, they will bring it to market through partners such as Philips, but also a number of smaller companies.

Read the complete article on the NWO website or watch the interview with Andrew Webb below. 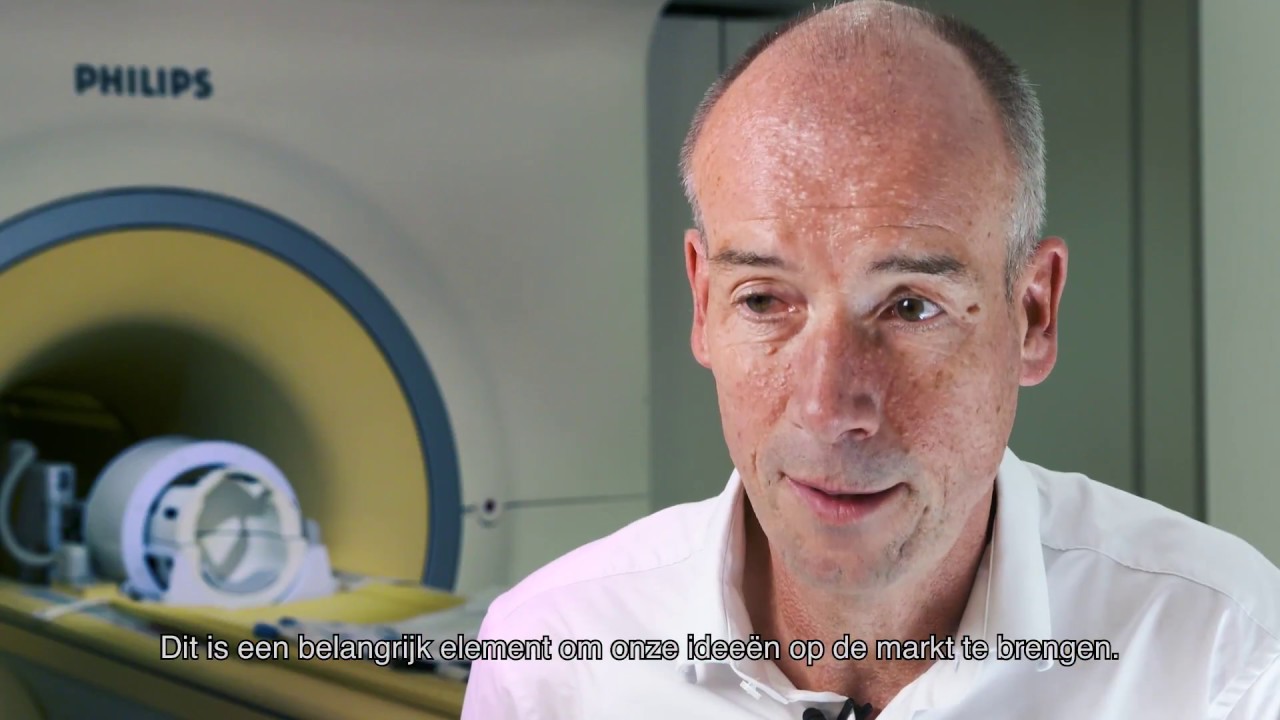